The SXBlue Platinum is one of the newer members to Geneq’s SXBlue family. As discussed below, there is really more than one Platinum - with 3 packages and some additional options available. This first post on the SXBlue Platinum is an introduction to the device, not an in-depth review. The goal is to help explain the features and capabilities of this little blue box. Once the -30 degrees C (-22 F) cold snap ends I’ll get my butt outside to do some field testing with ArcGIS Collector and related apps.

What is the SXBlue Platinum?

What is the SXBlue Platinum? Well, like many GNSS devices these days, it depends on the features you have enabled. What’s physically included in the little blue box? Everything. However, it just might not all be enabled by default. Depending on your needs, this can be a good thing, or a little confusing. Want to start out with an update rate of 1 Hz, and possibly unlock 10 Hz or 20 Hz at a later date? No problem. Or maybe use DGPS using the Atlas L-band correction service? Sure thing. Or possibly start leveraging RTK? You can do that too. But if you are only interested in basic functionality, there is an aptly named “basic” package that neuters the features (completely reversible procedure of course).

Ah yes, what most of us are interested in: Specs and accuracy. This varies by package/options, but the stated horizontal accuracy ranges from 8 mm + 1 ppm (RTK) to 1.2m (autonomous). I should also mention the accuracy measurement used here is Horizontal Root Mean Square (HRMS). The range is based on which components are enabled and available. The usual location considerations also have an impact (multi-path, signal strength, SVs in view, PDOPy stuff).

The SBAS/WAAS accuracy is up to 30cm, which is great considering no RTK or rovers are needed for this. Vertical accuracy isn’t listed on their website (yet) but Geneq confirmed it is 60cm VRMS for SBAS which is pretty typical considering the horizontal (V is usually 2 to 3 times H). It should be noted that the older SXBlue II spec sheets used the 2dRMS SBAS accuracy stats - so this isn’t a change from the older model specs, just a different representation. The 30cm HRMS of today is the same as 60cm 2dRMS of yesterday .

This switch to stating accuracy using RMS shouldn’t be a surprise to anyone as it aligns with many other vendors (and looks better in brochures). I do like that they include this information in their media as some vendors still mislead by omitting the statistics being communicated (looking at you Garmin).

But accuracy isn’ the only spec worth checking out with the SXBlue Platinum. The signals are definitely worth mentioning here as well. As stated earlier, everything is included inside this device. Access to 5 systems (4 global and 1 regional), as well as 3 GPS bands/signals, with 394 channels, and a replaceable/rechargeable Lithium-Ion battery (~10 hours on a full charge).

Multiple bands, SBAS, and Sat. Systems will definitely help over the long run. The addition of planned GPS L5 band is beneficial as the rollout of this newest modernization continues through 2024. This band is more powerful allowing to track weaker signals, and better “ionospheric effect attenuation” when using in combination with another signal (in laymen terms: 2 signals are better than one). Ditto with 3 signals:

Through a technique called trilaning, the use of three GPS frequencies (L1,L2,L5) may enable sub-meter accuracy without augmentations, and very long range operations with augmentations. ~ GPS.gov

For a full list of specifications, check out their product page and brochure for a slew of geeky stuff. But one last feature worth mentioning is the inclusion of a battery meter on the device. I know it’s a small thing but the ability to see how much battery you have remaining in the field will help you plan ahead - and stay more productive.

As there are many different options and combination of features, the SXBlue Platinum currently comes in 3 customizable packages: Basic, RTK, and Survey. “Basic” is pretty much what you would expect, it’s a bare-bones setup with very few features enabled (GPS L1). You still have SBAS, and you’ll definitely want to use it - although this package seems to be lacking many desired features.

The RTK and Survey packages are where the hardware is really leveraged. With both packages all Sat. systems are unlocked (GPS, GLONASS, BeiDou, Galileo, QZSS), multi-frequencies are unlocked as well (L1,L2,L5; G1,G2; B1,B2; E1BC,E5A,E5B; QL1,QL2), and RTK available. It even comes with a rugged carrying case to protect your fancy new gear. I do wish these higher end packages also came with 10Hz by default (like the Arrow Gold and Garmin Glo) - but I guess it saves a few bucks if you don’t need it. 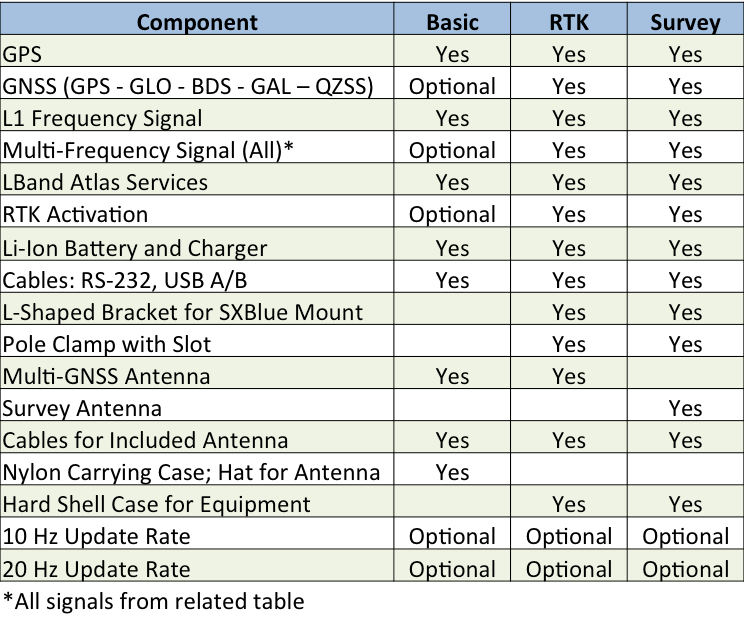 So what differentiates the RTK and Survey package? The difference is in the antenna. The Survey package comes with a “survey antenna” which is bigger, more sensitive, and has a Gain of 39dB. The regular antenna is a bit smaller with a Gain of 28dB. In short, it’s a better/upgraded antenna that allows it to track weaker signals - potentially giving it more satellites in view for a longer period of time.

ArcGIS Collector and a few other apps are on the agenda for the SXBlue Platinum. Once the snow and cold temps have passed I will get outside to do some field testing. Truth be told I don’t do field work during NFL playoff games either.

If you found my writing entertaining or useful and want to say thanks, you can always buy me a coffee.

It was finally time to get bundled up and test the SXBlue Platinum in nature. Not only to test the functionality, but with the recent -20c…